Off the shore of Lorain, Ohio is the lighthouse that has become the symbol of the city. It served for years as a beacon of light for ships on Lake Erie. What tales it could tell of storms and shipwrecks, of dutiful serving and patient waiting. It was the steady beam on which captains depended as they sailed the lake.

The first navagation light was a lantern hanging from a pole near the mouth of Black River. However small, it was a help to vessels on the lake. Still, there was a need for something better in the early years of the 1800s.

The first lighthouse on the Black River was built in 1836-37. It was a brick structure built close to the shore. The light used lard oil fuel,which was later changed to kerosene.

A year later on November 26, 1838 Lieutenant C. T, Platt, U. S. N. wrote in a report that the Black River Beacon was lit with 8 fixed lamps, each with a reflector in need re-silvering. The Beacon it leaked badly, its frame needed soldering and the windows needed puttying, all of which could be done for $25. 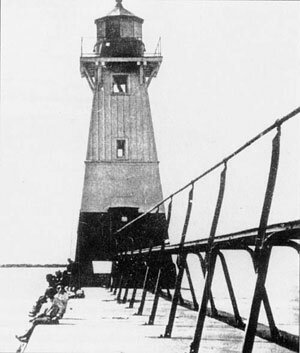 By 1875 the lake had deposited sand near the location of the lighthouse. Thus, it was said to be on the shoreline. Over the years many changes and improvements were made. This first light was replaced in 1875 when a new light was placed at the end of a newly constructed 600-foot pier that led from the west side of the mouth of Black River. Every day the keeper had to take the oil to the lighthouse. Storms often blew from the west and on two different occasions lighthouse keepers were washed from the pier and drowned. It was decided to build a 3-4 foot high metal walkway on top of the pier so that the keepers would be above the "green" water of the waves.

In 1891, Congress approved $400 to establish a range light for Lorain. The 65-foot Star iron tower was built near the shore. This allowed vessels to line up the beam from the lighthouse with the range light, so then they could sail right into the harbor.

Because of the threat of fire, an iron oil tank was built on the old lighthouse foundation between the shore and the end of the pier. The oil was used for the lighthouse lamps. The tank had a brick lining on the outside and that first elevated walkway was built from the tank house to the lighthouse.

The steamer C. B. Lockwood struck the west pier on the night of April 21, 1893 and did damage to the pier and one leg of the beacon. The steamer owner repaired the damage. In 1893 the rear beacon of the range light was fitted with a hoist and a light. The next season the schooner Alta hit it when it was being towed.

On August 25, 1894 a new tower for the rear beacon was built in a less exposed position. Even so, the steamer Caledonia ran into crossties under the tower on the outer end of the pier on November 2, 1894.

On the night of June 24, 1895 the schooner Mabel Wilson, while going out of the harbor, had lines tied to the legs of the elevated walkway. The legs broke and damaged parts of the walk. The owner paid for the repairs.

On August 16, 1895 the upper part of the rear beacon was completely wrecked and 3 lens lanterns were shattered by the collision of a ship being towed out of the harbor. The owners of the 2 vessels paid for the repairs.

In 1897 the west pier was extended and the beacon was moved to the end of the pier.

On August 7, 1897 the schooner Young America hit the rear range beacon. The owner paid for repairs. Also that year, much of the elevated walkway was again rebuilt and extended.

In 1900, the rear range beacon was put on a new foundation some 990 feet from the front beacon. A balcony and handrail were built around the base of the beacon lantern. In 1906 about 350 feet of iron railing was built and 100 feet of wooden elevated walk was built on the west pier.

There was much talk about the need to build a house for the Lorain light keeper who was taking care of the beacon and range light. By 1913 there were plans to build a new lighthouse that would include a place for the light keeper to live. The actual construction did not start until 1916 and the lighthouse was not finished until 1917.

The new 1917 lighthouse was built on a wooden crib foundation. The crib was filled with sandstone and sunk into 30 feet of water. On the top a concrete base was built, and above that was the construction of the three-storied building. Included on the first floor was the engine room, and storage. The second floor included the living quarters. Electricity was installed in 1932. The rotating beam projected 15 miles out. The bulb in the center was surrounded by “fresnel” lens, which is a series of glass prisms, each of which magnifies the light into a final brightness of 50,000-candle power (924 Watts). 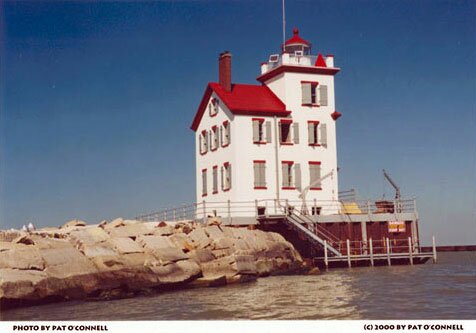 In 1939, the U. S. Coast Guard took over operation of the lighthouse. During one month in the late 1950s they received over 60 distress calls. The Coast Guard maintained the facility until 1965, when it was decommissioned. A new automatic light had been installed on the pier and only was checked occasionally. Upon decommissioning the lighthouse was scheduled to be torn down.

The first Lorain Lighthouse Celebration was held on August 5, 1989 to secure the lighthouse's place in the history of Lorain. Many people worked to save the Lighthouse. Ownership went through many hands until in 1990, when the Port of Lorain Foundation, Inc. bought it for $1.00. Since that time much money and effort has gone into restoration. New steel piling was driven around the outside of the wooden crib, and concrete was poured into the entire base. The building itself was restored and painted.

The pier leading to the lighthouse has a water separation so that the current will help to keep sand from building-up at the mouth of Black River. While this is very necessary for navigation, it also causes problems of accessibility for people who want to visit the lighthouse. There are plans for boat tours to the Lorain lighthouse in the near future.

Lighthouse items from our giftshop: